Good evening everybody and how is your "holiday" going?....Mine is cool, my Sweetest and I just came back from Office Max because I needed some stationary and other paper goods....I looked around the other day and almost (I said almost) didn't have any clean paper to chicken scratch on...Now you KNOW I cant have that; like at all....Found some cute stuff and some even cooler letter writing stuff....some of my good folks will be receiving a letter from me in the near future....I'm sorry but this technology mess CAN SO NOT TAKE OVER all the good stuff in life.....I wont let it....
Now this post is about my cool new Star Trek dress I made a while ago...I got the fabric from a local quilt shop across the street from my gig and it was a pretty penny too....I love it and it seemed worth it though because it has Lt. Uhura all over it; her name and all....the reason I call it the "best mistakes I ever made" because the dress is just chock full of 'em....first of all, I cut it out wrong so all the Lt. Uhura's were upside down....now yall know my mind immediately went into creative mode so I used the leftover fabric to fussy cut her out and used an embroidery stitch to cover up the upside down ones with her right side up!...I mean I was named after her for goodness sake!  I have to fix her!....then the darts just would not cooperate....I've made countless darts in some of the most delicate of fabrics but this tough quilting cotton just said NO to darts....then I jacked up the zipper....I actually wanted this one invisible because it was nothing special this time; not vintage or anything but it ended up showing anyway....It was uneven at the top too and I left it just like that....I even sewed the sleeves on wrong!(but I used a cool striped, sheer knit I was hoarding for 'em)....
But let me tell yall : I LOVE THIS DRESS, mistakes and all....its the fabric and all of its coolness that made every mistake virtually unnoticeable, well except by me....I got compliments on it too while we were out; probably from fellow Trekkies and other cool, nerdy folks.....its New Look's 0167 View D modified
Hell I'm even watching Star Trek right now!...the Next Generation currently showing....Commander Data, Captain Picard, and Lt. Worf got the screen sewed up  (pun intended)...even my hair today resembled Counselor Troi's!....My Mama used to think Commander Riker was handsome and I used to be just too excited to see Commander Geordi La Forge; it was the bee's knees I'm telling you....He was introduced to me way before his debut on the Next Generation through Reading Rainbow though which makes it that much more awesome....I wore my round toe boots to pull off the whole Trekkie look....Nerdy yeah, but the cool factor overrides that!..well IMO wink-wink.....Let me share the piccies now and watch my show...Commander Geordi trying get his mack on right now; and the lady is married!..they had drama too! LOL!...There I go rambling.....;)
Be Dope and Prosper!...Outer space style!
~~MsKRS~~ 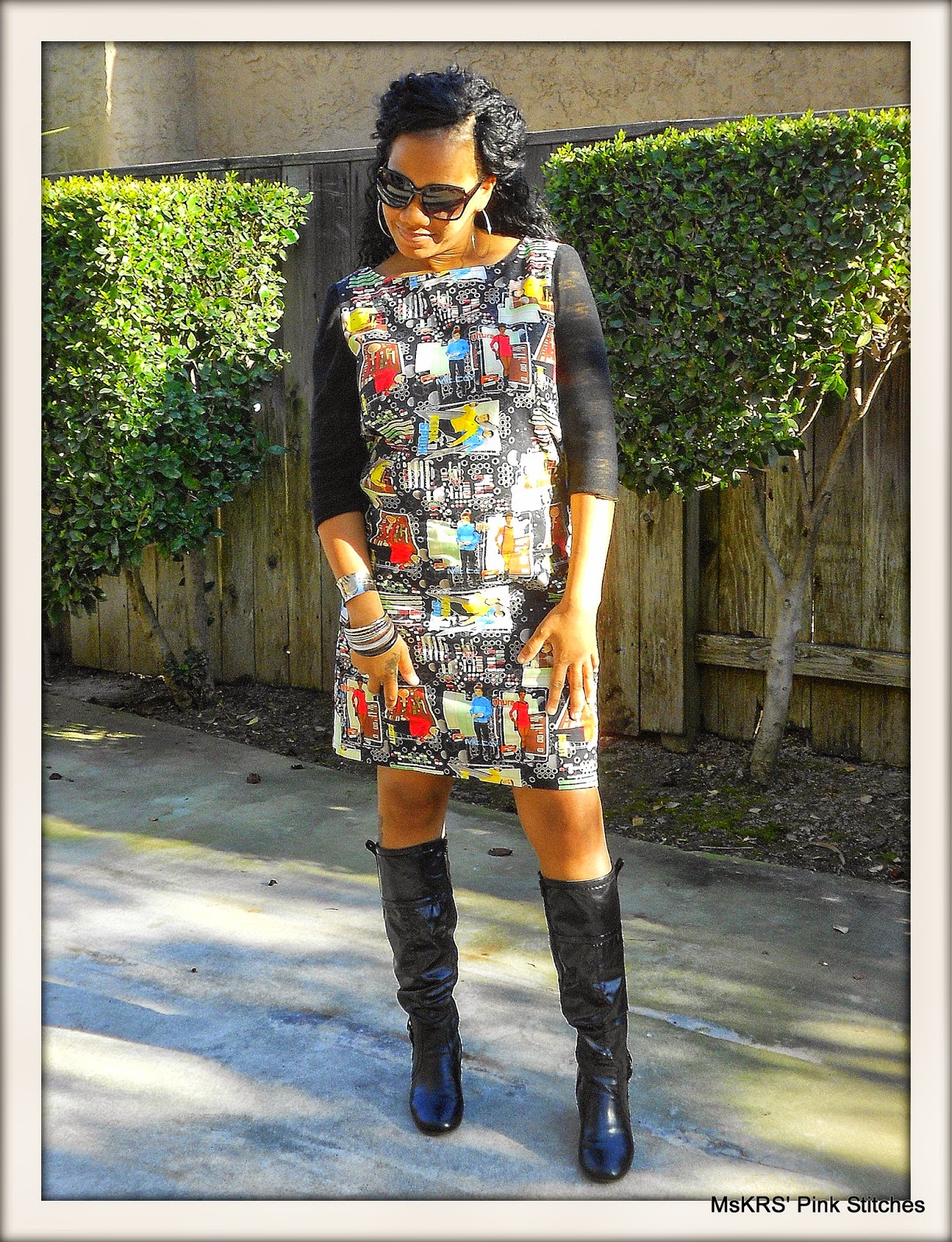 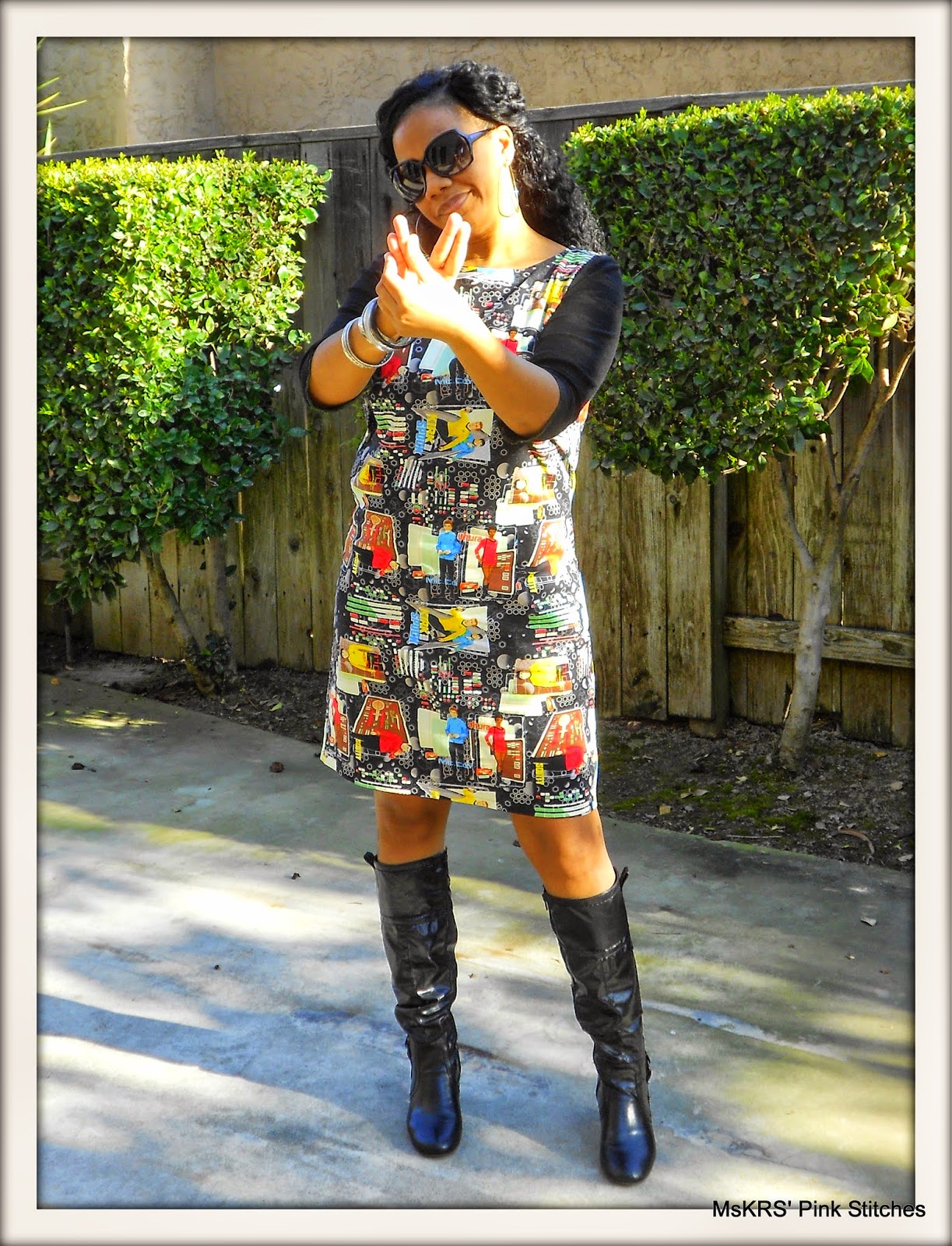 Trying to do that live long and prosper thing Dr. Spock does but yeah, I cant do it.... 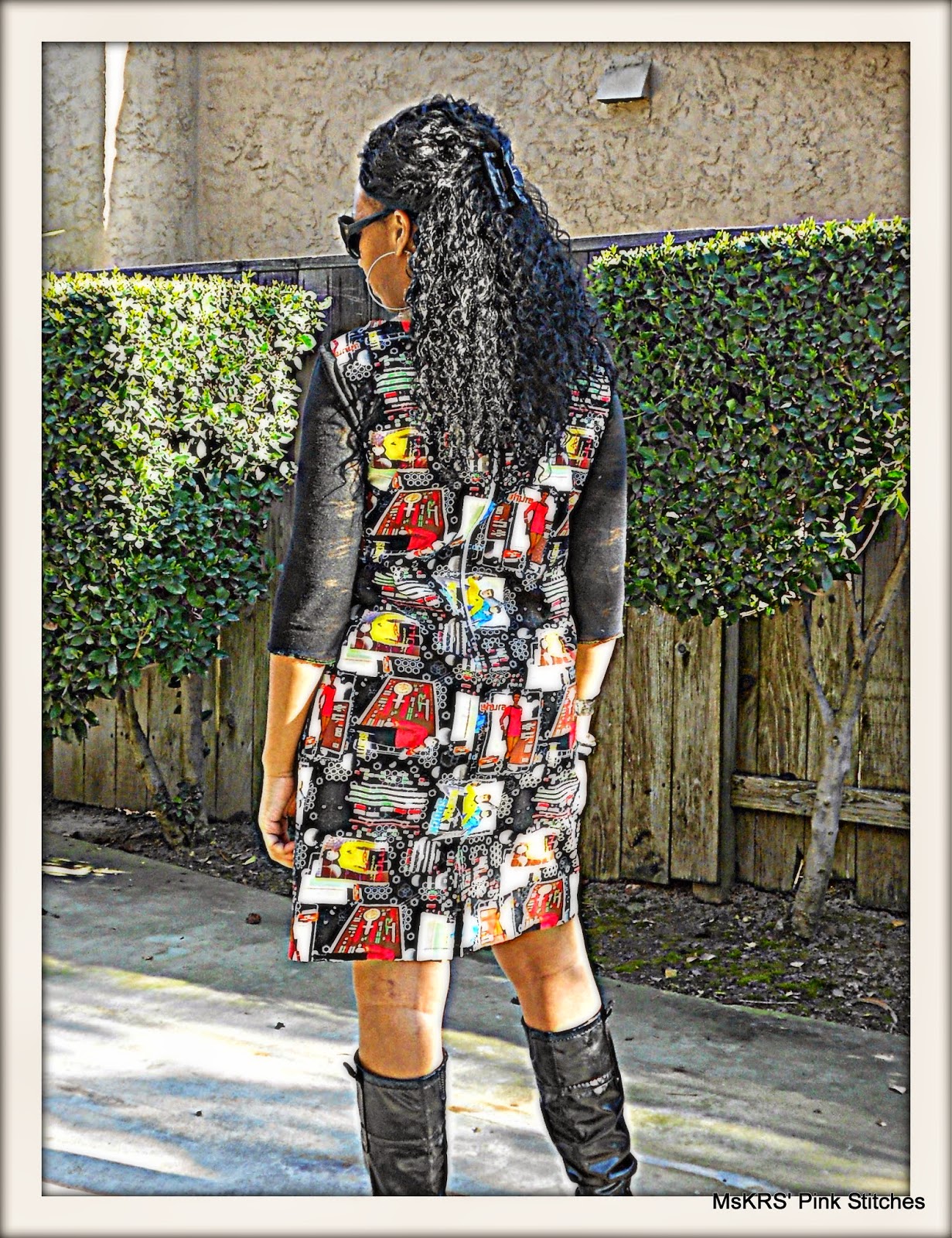 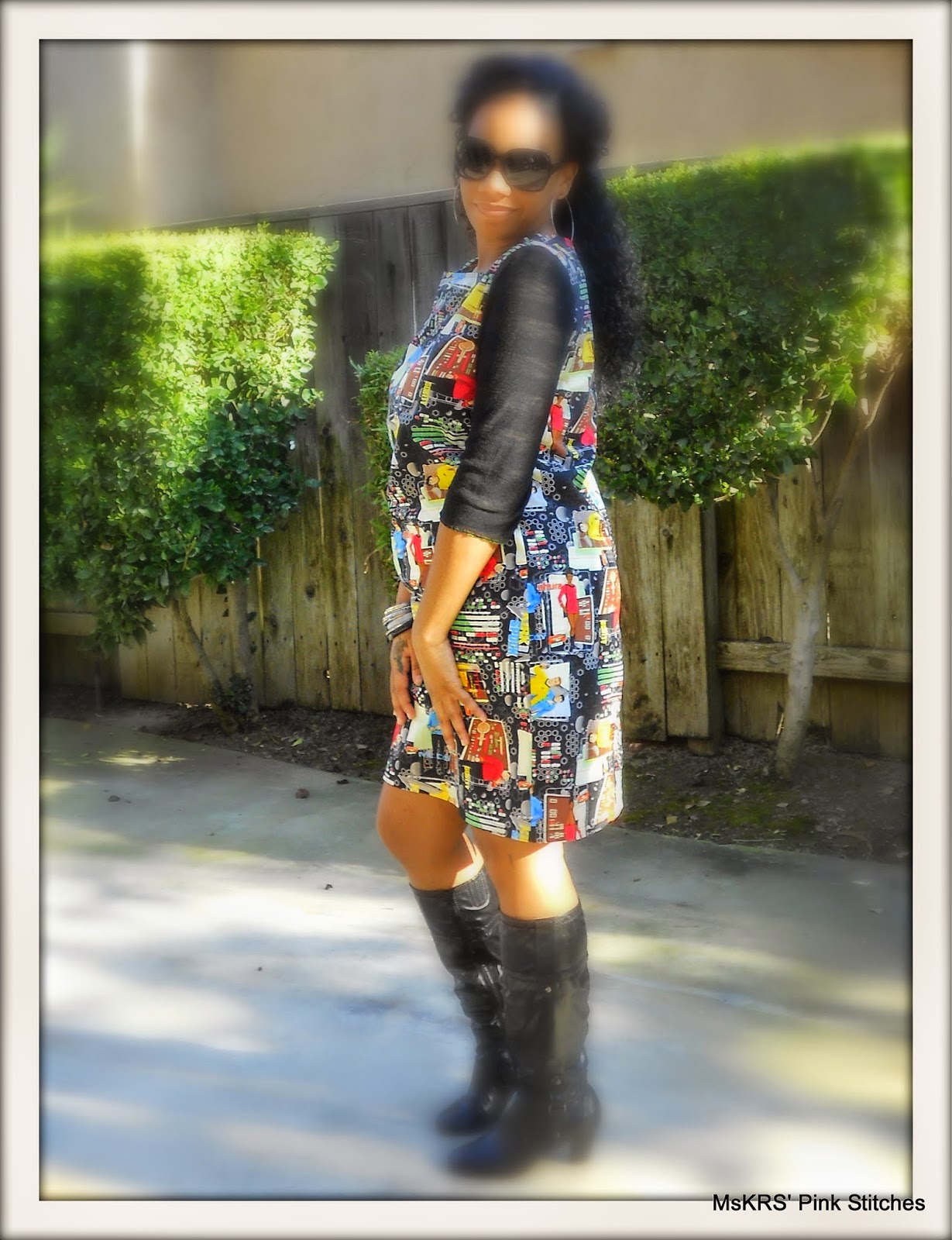 Puffy looking side shot...the damn darts would have helped with the mid-section mishap....geez....(maybe I'll try to put them in one of these days) 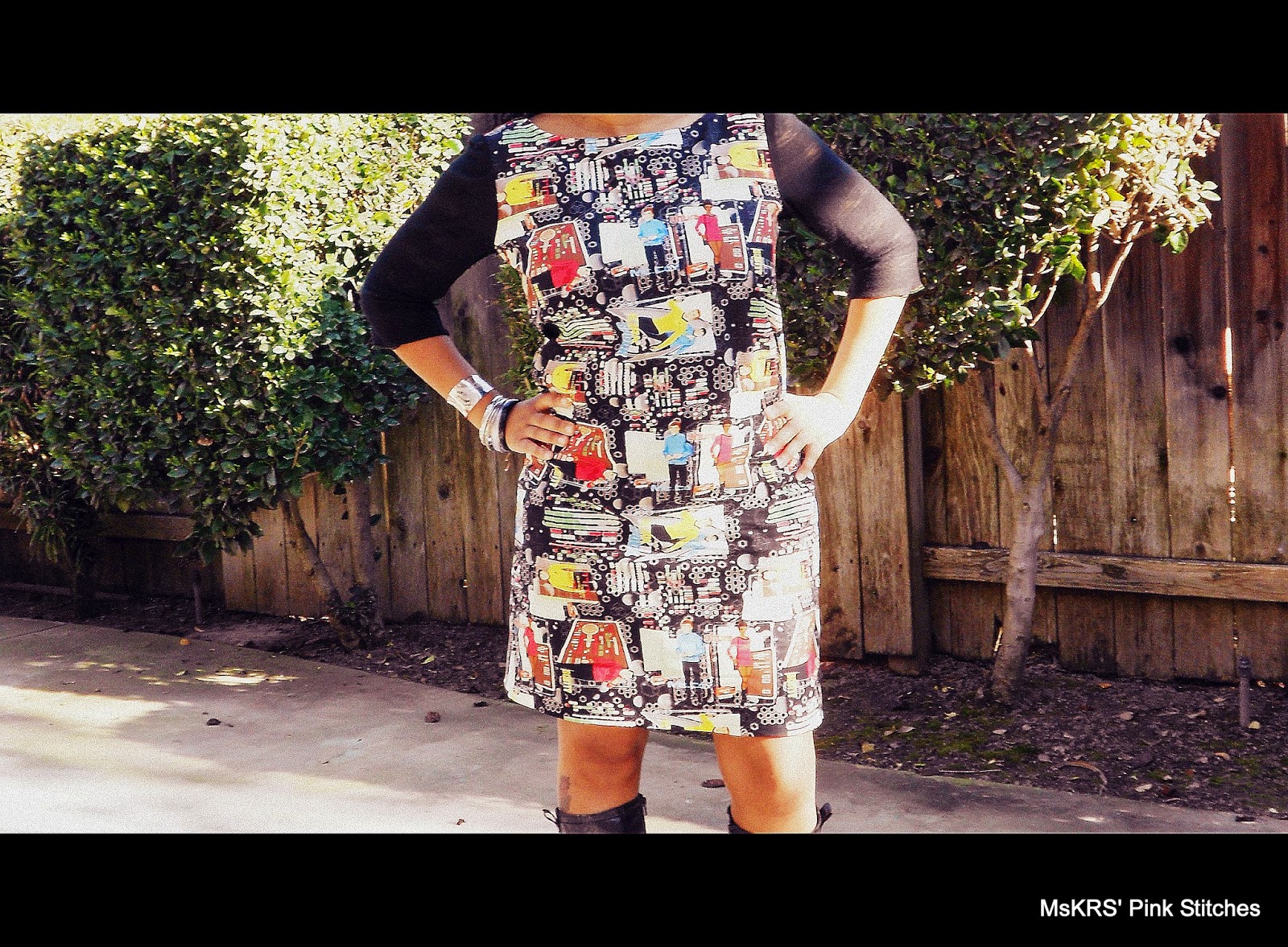 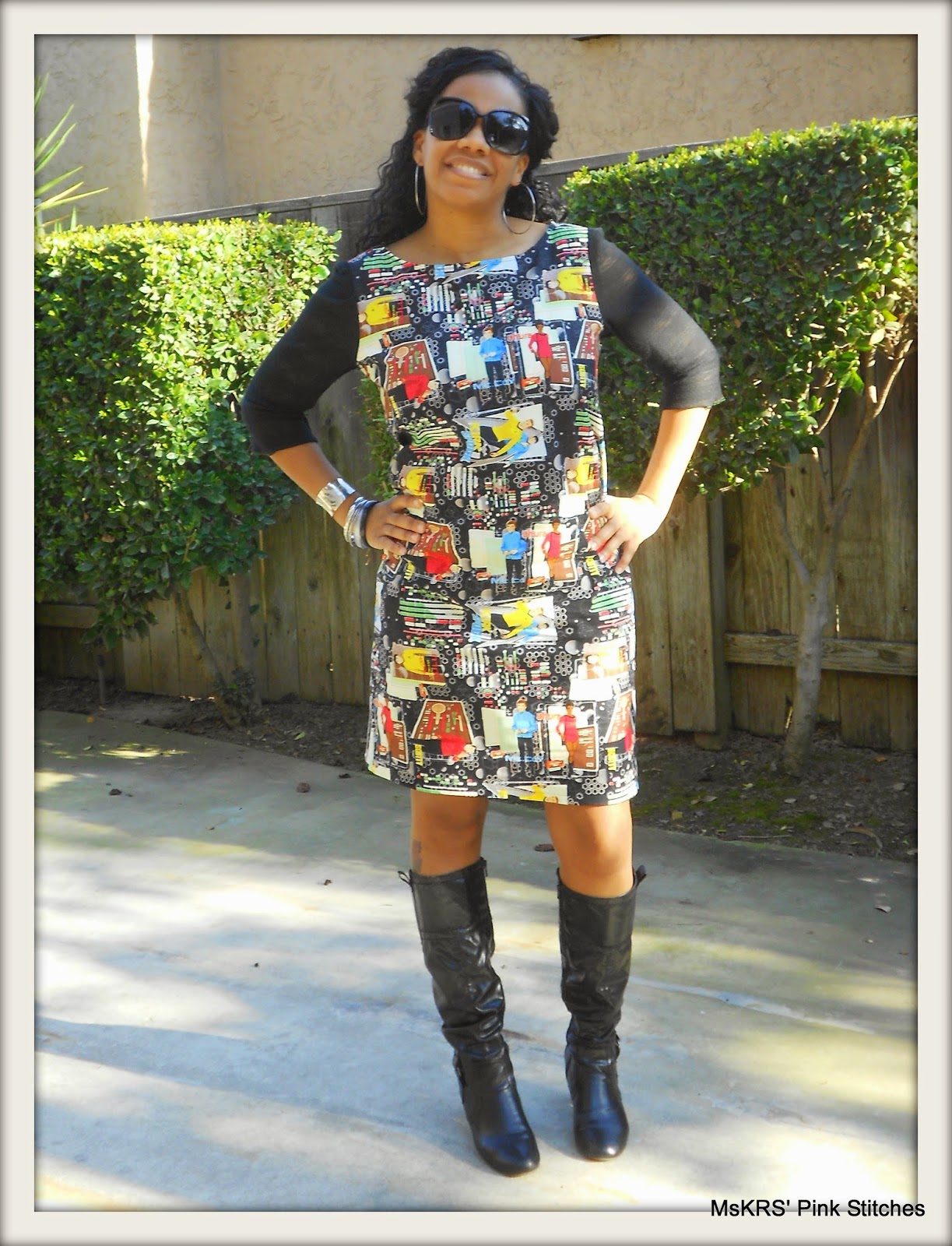 MsKRS and the case of the mystery patterns

Good evening everybody!...I'm up watching Big Bang Theory and talking with my babygirl....the cats are running through here like they always do around this time which usually makes me close my door on 'em...they are very noisy and hyper around this time....but tonight I'm letting 'em run in and out of my room too....they sneak in my sewing room and inspect everything any chance they get; if I see 'em in there though I make 'em leave....I believe my guy cat already stuck himself with a pin or two...I notice he doesn't try to jump up on the sewing counter where they are anymore...poor thing, poor nosy thing...smh....
I got dressed earlier with some of my makes but for some reason I cant find the patterns I used to sew them!....I looked twice for the patterns in my pattern drawers with no luck..now I cant share the pattern numbers...but if I find them I'll make an a quick update....I do know that the top is one of the first patterns I ever bought; its one of those patterns with just one view...I got it from Wal-Mart at least a good 5 years ago...it was one of those 97 cents ones....and the skirt I'm pretty sure is Christine Hayne's circle skirt pattern, but I have quite a few now so I cant say for sure....I do believe its hers though....I made this skirt and top a while back; I just had never worn them before....the skirt I believe had already needed a repair; I didn't sew the band on very well at first so I had to fix that....and the top went with it perfectly although I made it out of boredom one day a few months ago without the skirt in mind....sewing works out like that....
I used a glittery knit fabric for the top....the glittery stuff is hot Pink although it didn't photograph well at all...I swear I need a new camera to show more detail...I'm working on it....the skirt got whipped up out of a kinda stretchy, tie-dye cotton fabric...I got them both from Hancock's, ordered online...You just never know what your going to get unless you order a swatch which is something I never do....any "ugly" fabrics always ends up being something pretty anyway so I just take my chances!...I liked both of these when I got 'em in the mail....
I didn't really feel like taking pictures today either but my Sweetest persuaded me to....I'm glad he did because I told myself I would post more...it was sprinkling today and I just wasn't in the mood...it wasn't all that gloomy though, just a little wet....He snapped a few for me, I came back inside, and went back to sleep....I was tired today; I needed rest which is probably what contributed to my mood earlier and me being up writing right now...I may even sew up a quick top or skirt before I go back to sleep 'cause the sewing bug is definitely biting....I just keep looking at these sweater knits I have in there....Well here are the mystery clothes and I'll show you good people something else in a few....
~~MsKRS~~ 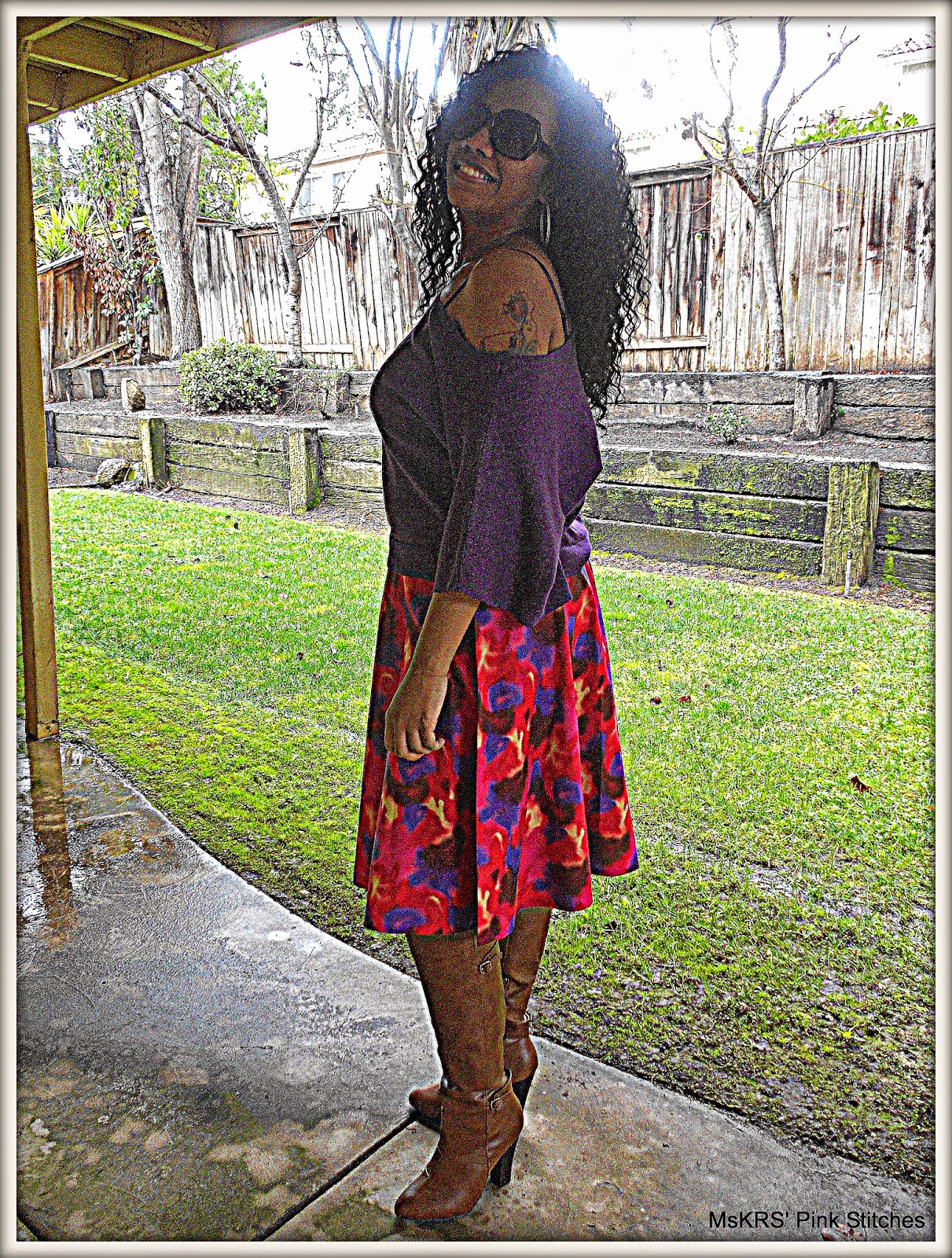 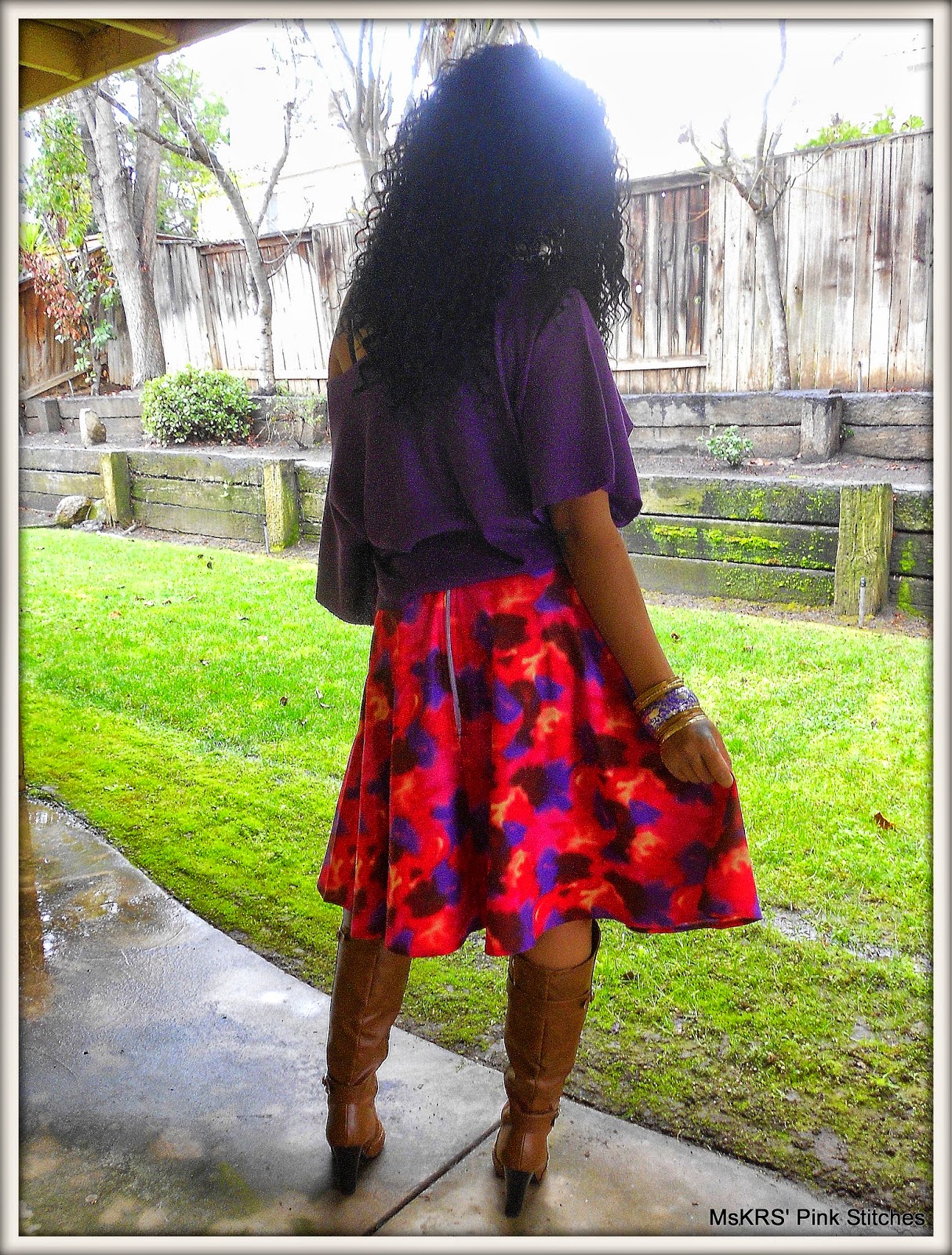 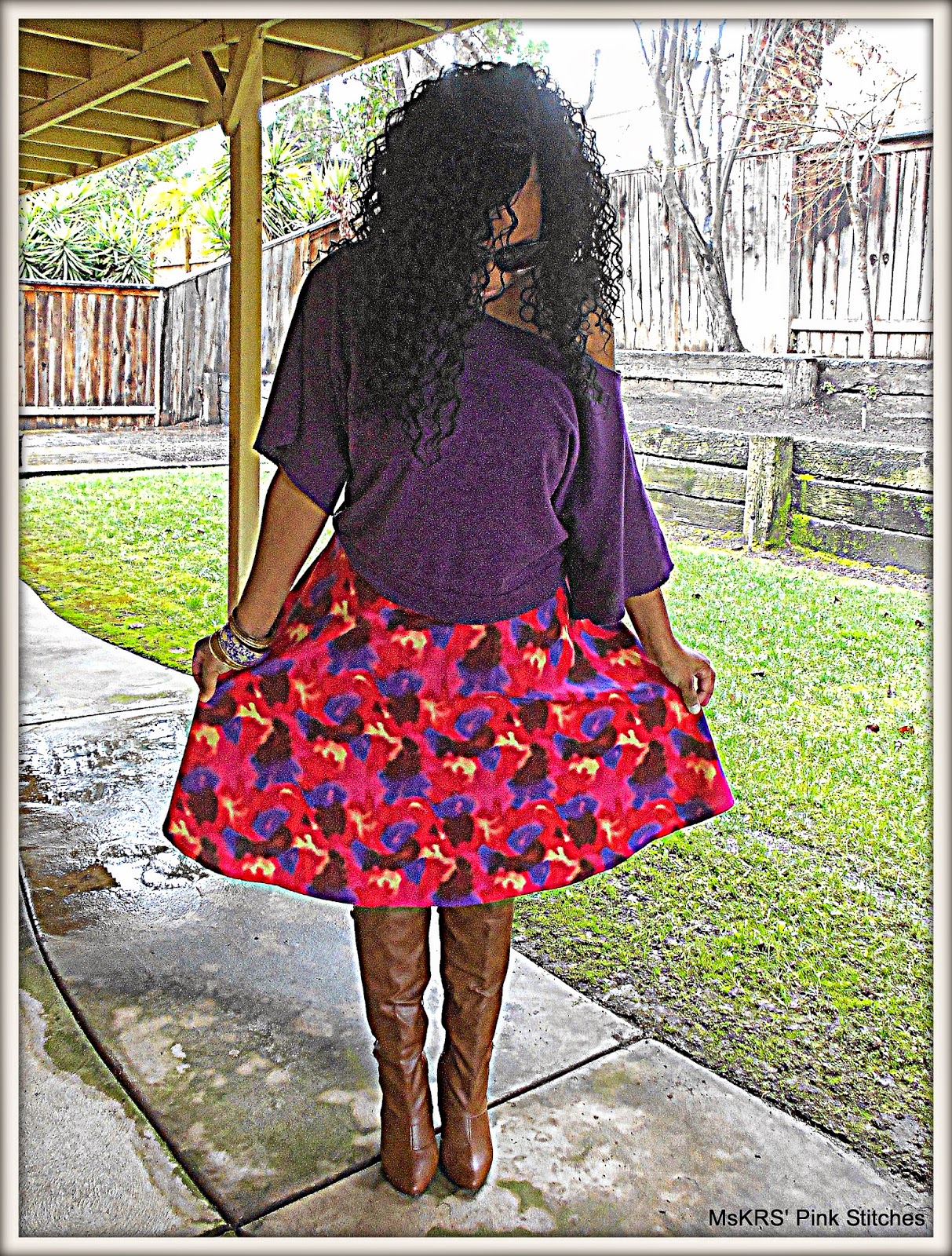 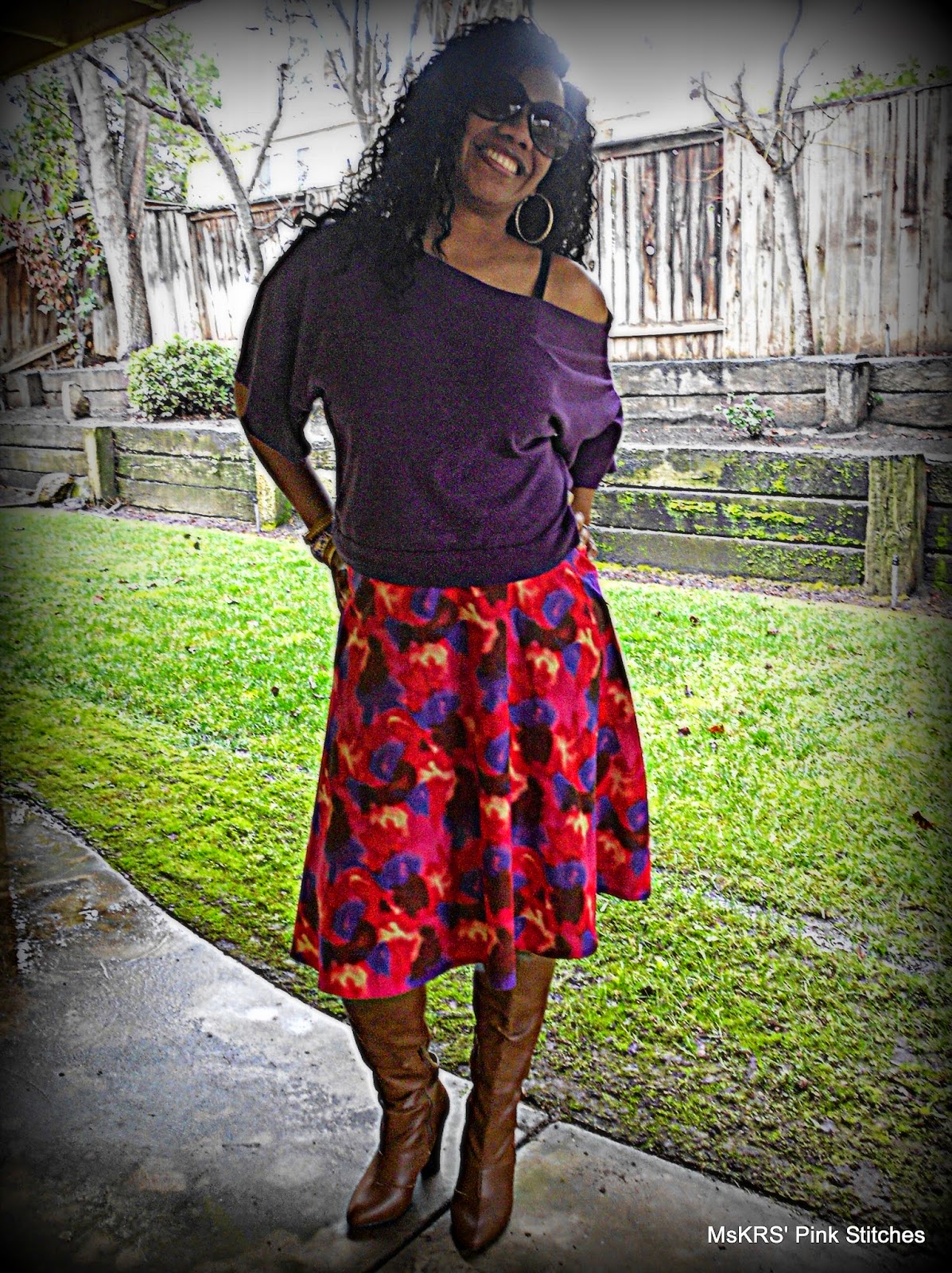 Blahhhh to the rainy days....wasn't too cold though at least....

Posted by Unknown at 11:36 PM No comments: Links to this post

Polka dots and a Butterick beauty....

Evening all; and how are things going?...I'm all right, just been sewing and living....Coupla' snags along the way but such is life right?....Before I go and do a couple loads of laundry I thought I should write about my dress real quick like....
I whipped up Butterick Fashion Express 1 Hour Pattern View B a little while ago....While my Babygirl was home visiting I hurried up and had her take some photos...My Sweetest usually takes them and drives me nutty when he does! LOL!...I love him anyway; but my daughter was my first photographer so I asked her to take a few piccies this go' round....
I have many super cool knit fabrics so I immediately took to my stash and started on my new dress....I used a slinky, knit fabric that I found at Hancock's Fabrics on one of my many trips there...When I saw that fabric I knew it would become something awesome....that's what I do when I get fabric....I never have any true intention on any one specific thing, my fabrics just end up being whatever strikes me at the time....I did get my coat fabric specifically for that project; 'cause I don't usually buy such heavy fabrics unless its denim or something....(see my last post to check out my new coat that is basically too hot to wear here; damn).....
This pattern was true to what it said, it was very fast and easy and I finished it in about an hour and a half....OMG its super comfortable; like a gown that can be worn outside with my boots!...I know I'll be making a couple more....I left the pockets off this one because the fabric didn't seem strong enough for them; like they would have made it sag....the next one may have pockets though if I see fit....View C may be next because it has puff sleeves and I have a fabric in mind already....Well let me share the photos and like always if you want to know more just let me know!
**MsKRS** 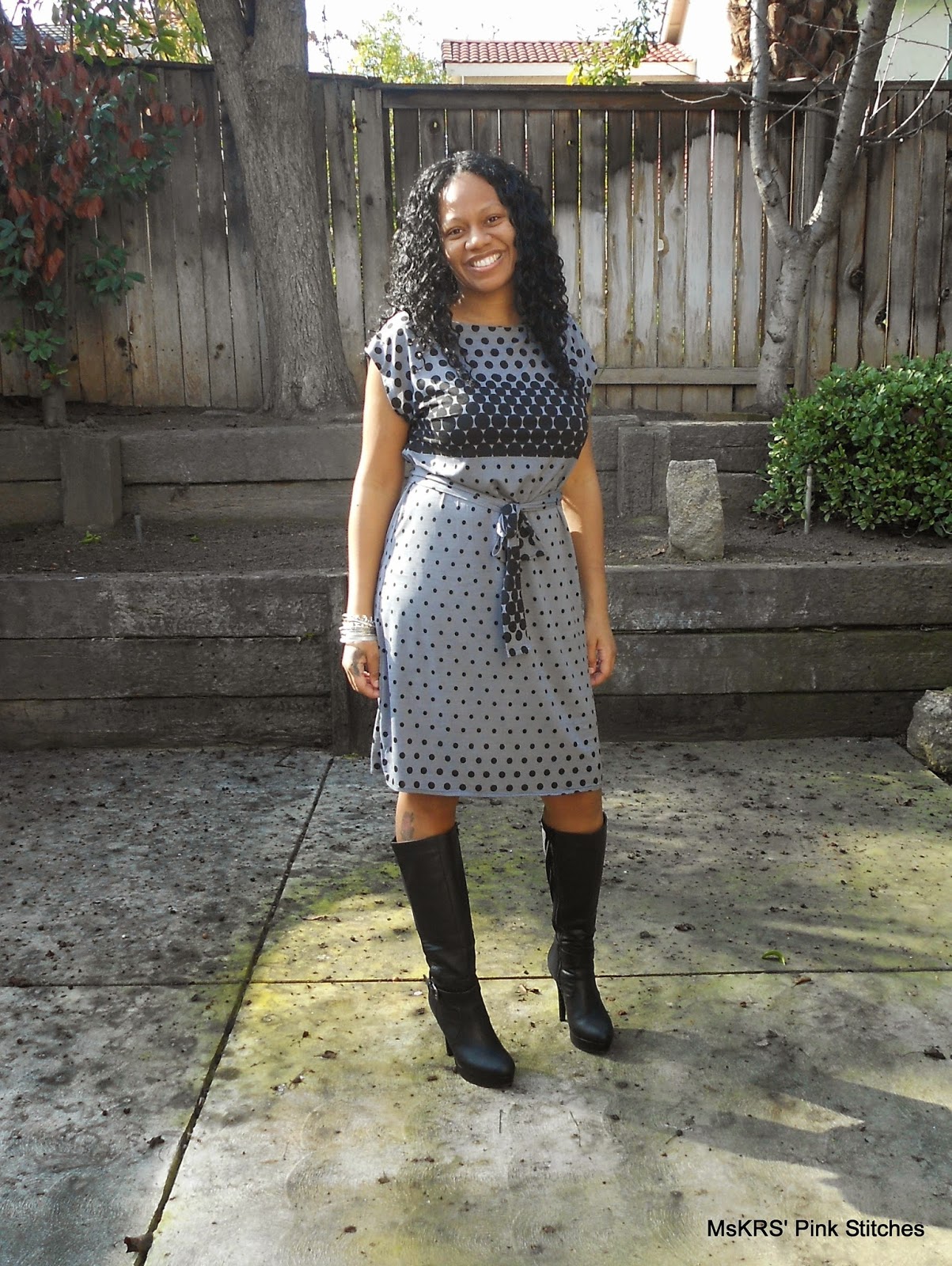 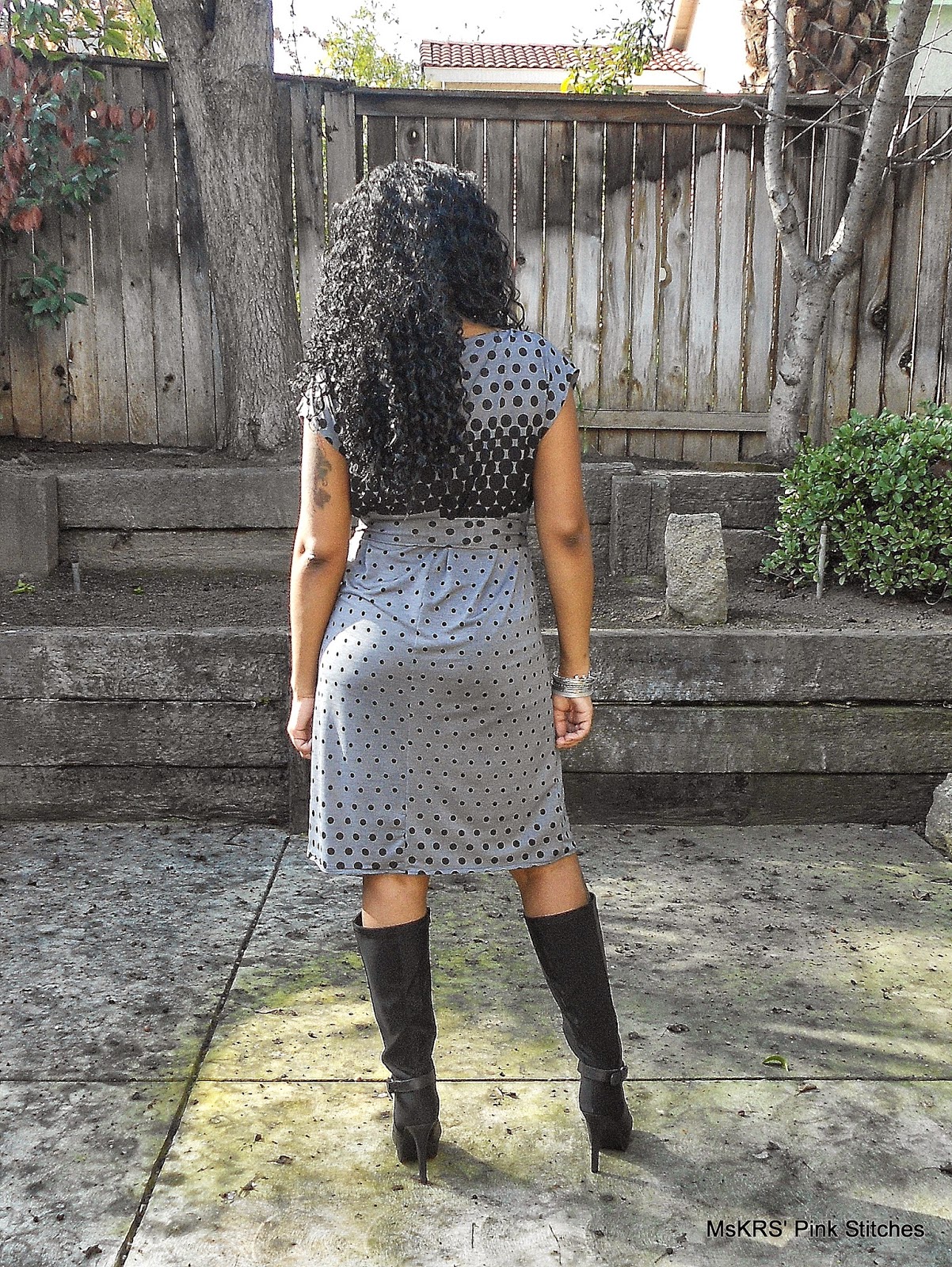 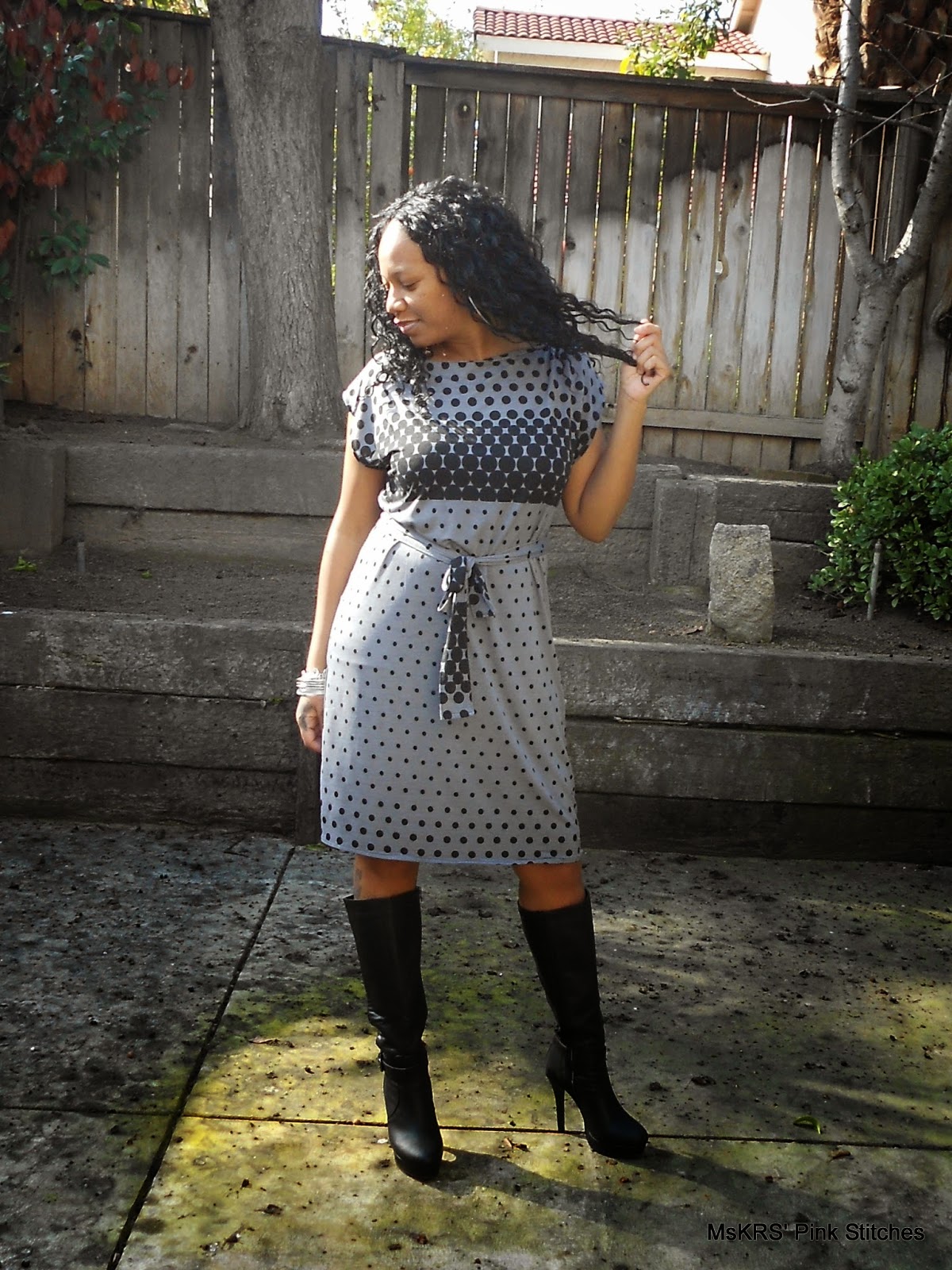 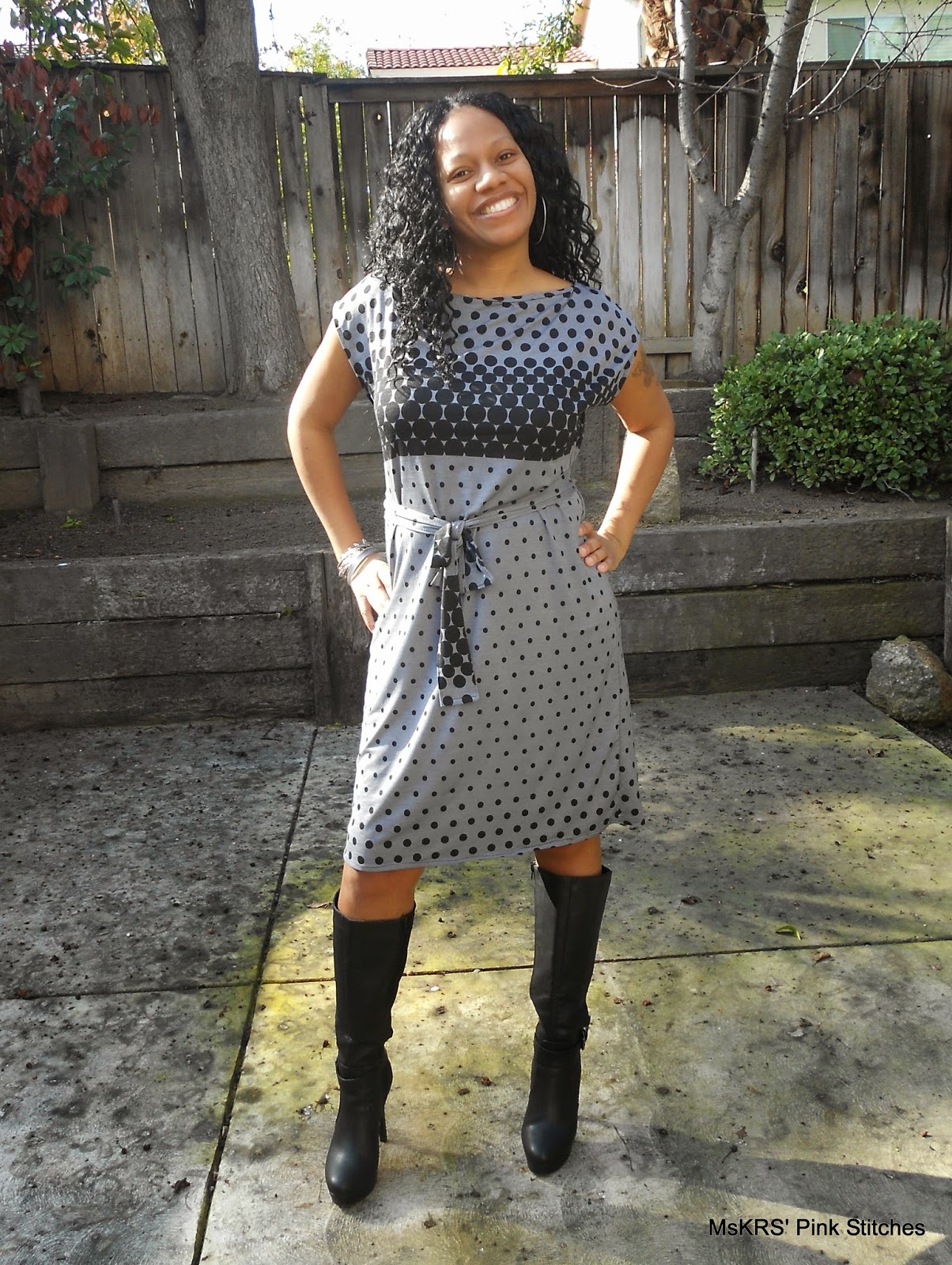 Posted by Unknown at 5:34 PM 5 comments: Links to this post

My name is Christy Packard and I was severely bitten by the sewing bug five years ago. I had never sewn before; only having taken sewing in high school. In that sewing class I made a replica of a Pound Puppy and got an "A" for the project! Shortly there after, his nose fell off! By the time I started sewing again my poor puppy hadn't been able to smell for over twenty years! One of my first projects was to hand sew my puppy's nose back on..(did you see him in the photos?) I started out with bags; you can see my sewing progress in my photos.... I love making handbags and clothes and showcasing the finished results....I get asked a lot if I sew for others, and I want to mention that sometimes I do!...and I sew appreciate that folks think I sew that well! I have sold a couple dresses and a few bags; and if you see anything you want just let me know!...We may be able to work something out! Feel free to check out my photos and join me on my journey to becoming what I would call a SEAMSTRESS! Sew therapy here, now, and forever! ~~Love Christy

Share all of your tips, stories, and other sewing and crafty know-how!...

Thank you so much for visiting my blog!
Please visit again soon and often!
HAPPY SEWING FRIENDS! 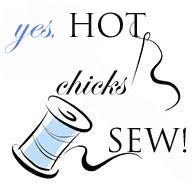 Welcome to MsKRS' Pink Stitches! Have a look around, stay awhile....:)